Every month, Mixtape Couture will be showcasing and shining a light on the talent that can be found in Sheffield. From bands to fashion brands, shops to restaurants, events to exhibitions, if it’s in Sheffield and it’s worth you knowing about then I will be letting you know. Whether you are a Sheffield resident yourself or are planning a visit one day [which I highly recommend] then hopefully this feature will help you to know where to visit, what to do and what’s going on in the Steel City.

This month, I thought it was about time that I celebrated a part of Sheffield history that is world renowned not only for its theatre performances and workshops but also its use as a sporting arena. I’m going to be celebrating the wonderful and iconic, Crucible Theatre.

The idea for this theatre as a replacement of the Playhouse that was already there came about in 1968 and a year later work started on the building of what has become such an iconic theatre. The Crucible officially opened in October 1971 just in time for the opening production of ‘Fanfare’ an evening of entertainment including an improvised scene by local children, Chekov’s ‘Swan Song’ with Ian McKellen and Edward Petherbridge and a finale with Sheffield Brass Band.

From that moment on the theatre was open for business putting on everything from dance and musical performances to classical and modern theatre. Whether it is a touring production full of big stars or local productions, there is something for everyone on here and my favourite thing about it is the fact that The Crucible is so rooted within the community working with local students and aspiring theatre actors, producers and more.

These in-house productions are in collaboration with Sheffield Theatres Trust and are the cornerstone of local arts communities but also of the success of the theatre itself.

In 2001, the theatre was ‘Theatre of the Year’ and in 2007, the building went through a £15million refurbishment which lasted until November 2009, a refurbishment that has brought a new lease of life to the venue making it a spectacle to behold in the city centre. Throughout that time the theatre was closed, only opening for its other most recognised use, the Snooker World Championships.

Since 1977, my own favourite sporting event has been played in my fair city at this venue and every single year it is a great event for Sheffield. The atmosphere of the city over those two weeks in April is wonderful, as people come together to showcase the best this city has to offer. The small interior of the Crucible makes for a great, intense venue and atmosphere to the Championships, something I think they would struggle to find at any other venue in the country.

As a big snooker fan myself, I want the Championships to stay in Sheffield at the Crucible forever. The World Championships and The Crucible just work so well together, ingrained perfectly within each other. 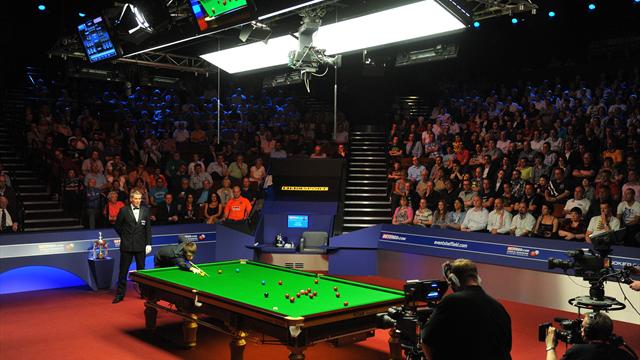 I’ve had the pleasure of seeing a variety of things at The Crucible over the years, from a play as a child on a school trip, to the Snooker second round and an insightful conversation event with newsreader Jon Snow as part of 2014’s Doc/Fest. It is this variety that makes this place so great and successful.

Whaether you love theatre, film, sport, music or dance, The Crucible is the place for you to make sure you visit in Sheffield because there will definitely be something on that will ignite your interests.