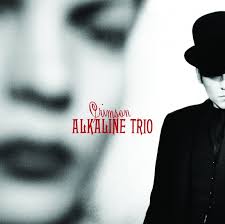 This is the fifth studio album from Alkaline Trio, produced by Jerry Finn and released on May 23rd, 2005 in the UK. A deluxe edition of the album was released on November 28th of the same year, the first CD was the original album and the second disc featured demos, homes demos and acoustic songs. The singles from the album were ‘Time To Waste’, ‘Mercy Me’ and ‘Burn’.

Some facts: ‘Mercy Me’ and ‘Fall Victim’ were featured on the soundtrack to video game FlatOut 2. A tentative title for the album was ‘Church and Destroy. The song ‘Sadie’ is about Susan Atkins a murderer in the Charles Manson family and ‘Prevent This Tragedy’ refers to the West Memphis Three which was a widely publicised and controversial murder case back in 1993.

Last year I spent some time revisiting the music I was listening to in my teenage years and I decided that they needed to be blogged about a bit more than they have been, cue finally writing about one of my favourite albums and bands from age 14, Alkaline Trio. Their fifth studio album, Crimson was when I first started listening to this band and they were one of the bands along with Green Day and blink-182 who shaped my music taste especially when it came to punk.

Alkaline Trio are a huge deal in the punk scene and though they may not be Green Day levels of recognisable punk bands they are well respected and have earned a huge and loyal fan base over their years consistently creating brilliant albums and touring around the world. Having released their latest album ‘My Shame Is True’ in 2013 which takes them up to 9 studio releases, they have been around long enough to know how to write a good punk album with wonderful musiciality and honest lyrics. It’s a career that has spanned 18 years to date and sees them getting fans returning to them time and time again whilst picking up plenty of new recruits along the way.

This particular release is the one that alerted my early teenage self to the trio and the different style of punk music they were creating compared to the other more well known acts I’d discovered to this point such as Green Day, The Offspring etc and the older punk sounds of The Clash, Sex Pistols and The Buzzcocks. It was a style that incorporated some form of goth ideals and lyrical themes were darker rather than political, angry or the sillier, upbeat pop punk sound. It was something my 14 year old self appreciated and loved but as I’ve got older I’ve come to appreciate it in different ways, understanding the lyrics and themes a lot more and looking into the more grown up sound they have always had.

But underneath those emotive, honest and sometimes dark lyrics is always an infectious and brilliant composed punk sound from fast guitars, sometimes heavy sometimes not, bass lines that either rumble underneath holding the whole thing together or take centre stage and drums that pound heavily in your ear drums or can softly pitter patter along on the quieter tracks. Guitarist Matt Skiba and bassist Dan Andriano share vocal duties with the former’s vocals being slightly more menacing than the latter’s while drummer Derek Grant systematically plods away in the background creating a solid percussive base.

The first track I ever heard was lead single ‘Time To Waste’ with it’s short, quick riffs, heavy drums throughout and a sing a long chorus it is still a band anthem live even today, 9 years later. Lingering piano melodies, juxtapositions of sound, typical punk aesthetics are features of some of my favourite tracks on the album: ‘Burn’, ‘Sadie’ and ‘Back To Hell’.

This will always be an important album for me and it’s an important album for a lot of people too as well as being a cornerstone album of the punk scene of the mid-2000’s. Still today it is one of those albums that lives on for people with an emotional connection to it running strong through many. It has stood the test of time and I’m sure it will continue to do so whatever the future may hold for the band. With their 20th anniversary only 2 years away there is sure to be some big things happening for the band be it shows, albums etc but until then we still have them putting on amazing shows on every tour they do as well as a great and vast back catalogue just sitting there waiting for us to dig through.