For the past couple of years, I’ve done an end of year blog, a bit of a reminisce about the best bits of my year. 2011 has been an amazing year for me probably one of the best, obviously there have been bad bits but I’d rather not focus on that and just forget about it all. I’ve had such much fun this year and made plenty of memories that I will never ever forget, so thanks 2011 for being an brilliant year.

I finished my 2nd year of uni in April and I passed with a pretty good mark as well, I was pretty proud of all the work I’ve done so far and my 3rd year so far has been the hardest and most stressful time but it’ll all be worth it in the end when I hopefully get a good degree for the career I want. Also, this year I finally reached my target weight that my doctor set me about 2 years ago which means I have lost about 6 stone in that amount of time. I’m so happy with myself, I feel so much better now than I did before and I think it has improved my confidence slightly as well. All the hard work has definitely been worth it and I’m determined to keep this up.

The best thing about any summer to me is festivals, I’m not so bothered about holidays it’s all about a festival. A weekend in a field with your best friends, drinking lots, eating crap and watching the bands that you love, there really is nothing better than that to me. I went to 3 festivals this year, Hit The Deck in Nottingham, Leeds Festival and Merthyr Rocks in Merthyr Tydfil. Two of them were brand new festivals and had really good line up’s and the other was a well established festival with the best line up in years and utterly perfect for me. Hit The Deck was a boiling day in April, The Blackout were the main band I went for and they were amazing and the after party was brilliant, checking into a hotel at 3am completely drunk was a definite highlight. Leeds was just absolutely brilliant [except for the weather] I saw so many bands and I saw my favourite band, Friendly Fires, there for the first time ever. It was a fun weekend as much as the weather tested us I think we stuck it out well and made the best of what could have been a really bad situation. Merthyr Rocks was insanely good, going to get tattooed on the Saturday and then the day of the festival seeing some amazing bands and meeting The Blackout again. Hopefully, next year will bring another festival at least, hopefully one I have never been to before as well.

This year as with pretty much every year I’ve been to plenty of gigs, I think I beat my current record this year though. Some of the best bands I’ve seen this year were: The Blackout, Friendly Fires, Kasabian, McFly, Panic! At The Disco and Bring Me The Horizon. Some of these gigs have been the best ones I have ever been to and it was amazing to finally see two of my favourite bands this year, they were definite highlights. And with going to see all these bands comes plenty of travelling, Doncaster, Leeds, Manchester and Wales all for bands and festivals. Next year will be a continuation as I already have plenty of gigs booked and plenty of travelling to do for quite a few of them.

In terms of travelling I also went away for the week to Milford on Sea a small town quite near Bournemouth, it was a lovely holiday and so nice to get away from Sheffield for a bit. It was lovely and quiet and I had the most relaxed week of the whole year while I was there. It was a 10 minute walk from a lovely pebbled beach and that was just stunning, I much prefer a pebbled beach to a sandy beach. This year I’m going to Edinburgh for my friend’s 21st and I’m going to Rome for my 21st and on the way home I have an 8 hour stop off in Brussels so I’m going to explore there a bit as well. Hopefully, I’ll get to go to some other places, I have plenty of places I want to visit. 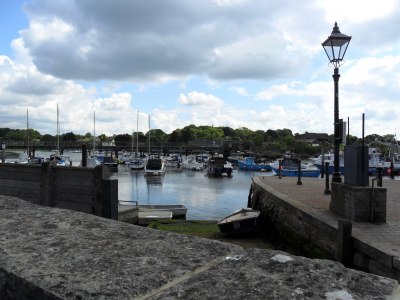 This year I also met The Blackout again as I mentioned earlier and that was amazing. As usual they were the nicest guys and me and Becky ended up in their video, well only like the middle of me but still my belly is famous. Plus, I met Ed Macfarlane this year as well, I’m not going to lie it was genuinely the best moment of my life. I’ve already written loads about this so I’m not going to bore you with much more because I could talk about it for hours. The fact that he came over to say hi when we were just about to leave after waiting for ages and I thought I’d miss meeting him was amazing. He really is the nicest guy ever and I won’t ever forget that entire day. However, I would quite like to meet him again mainly so I can have a proper conversation with him instead of the nervous ramblings I threw in his direction this time.

So, for this year again I’m not making any resolutions because like I said last year I always break them so they are completely pointless. But here are some targets that I am going to make for myself for the year:
– maintain the weight I am now with exercise and healthy eating.
– pass 3rd year and graduate with the best possible grade I can get even if I have to sacrifice my social life to get it.
– go to plenty of gigs and travel lots, preferably start planning or even go on my European trip.
– have as much fun as possible with the amazing friends that I have.
– finally, make sure I don’t take my friends and family for granted.