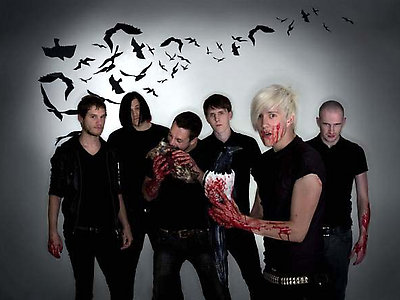 The band took to the stage just after 9pm and kicked off their set with previous single ‘Children Of The Night’ followed by ‘ShutTheFuckUppercut’. The set is a good mix of songs from their back catalogues with songs from their current album ‘The Best In Town’ and even a couple of songs from their EP ‘The Blackout! The Blackout! The Blackout!’ getting an airing as well. ‘Murder In The Make-Believe Ballroom’ was an absolute treat for any long time fan of the band especially as it had not been played live in a while. The band’s cover of ‘Fight For Your Right’ by The Beastie Boys received an amazing sing along but nothing to rival the sing along that ‘It’s High Tide Baby’ received. Songs such as ‘The Fire’ and ‘We’re Going To Hell… So Bring The Sunblock’ only fuelled the mosh pits even more with their fast tempo and heavy chugging guitar riffs. These were perfectly coupled with the more upbeat and dancey sounds of ‘Said and Done’ and ‘This Is Why We Can’t Have The Nice Things’. Finishing up the night on previous single ‘Save Our Selves’ which acquired a mass ending chorus of ‘Woah’s’ from the crowd and last single and usual set closer ‘I’m A Riot? You’re A Fucking Riot!’ one of the band’s oldest songs but it is a sure crowd favourite.