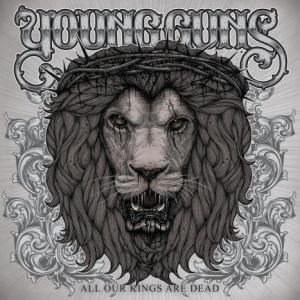 Young Guns
All Our Kings Are Dead
Live Forever

After the success of their 2009 ‘Mirrors’ EP, it was only a matter of time until we saw the release of Young Guns first album. With so much promise coming from their EP this can only have put pressure on the High Wycombe quintet to deliver something special from their debut album. The album starts off strongly with previous single ‘Sons Of Apathy’ which carries us straight into current single ‘Crystal Clear’ a song bound to get crowds moving and singing along at live shows with it’s upbeat rhythm and catchy chorus. The vocal content of this record could at times be described as dark and quite personal but they are executed perfectly with lead singer Gustav Wood’s vocals. Songs such as ‘Stitches’ and ’After The War’ add a much slower, more melodic element to the record as they leave the vocals to stand alone much more throughout the verses than in other songs on the record. Previous single ‘Winter Kiss’ is yet another highlight on this remarkable debut album, it’s slow and dramatic build up leads you into the full on rock track that it becomes. Finishing up the album with 7 and a half minute long ‘Beneath The Waves’ a track which is quite heavy and finishes the album well as the heavy drum beats and guitar riffs fade into the inevitable silence. From listening to this album, it is clear to see that the lads in Young Guns have the potential to make it far in the ever-growing UK rock scene. Their EP and live shows provoked early excitement about the band and it’s amazing to see that the band have backed up early hype with a gem of an album.